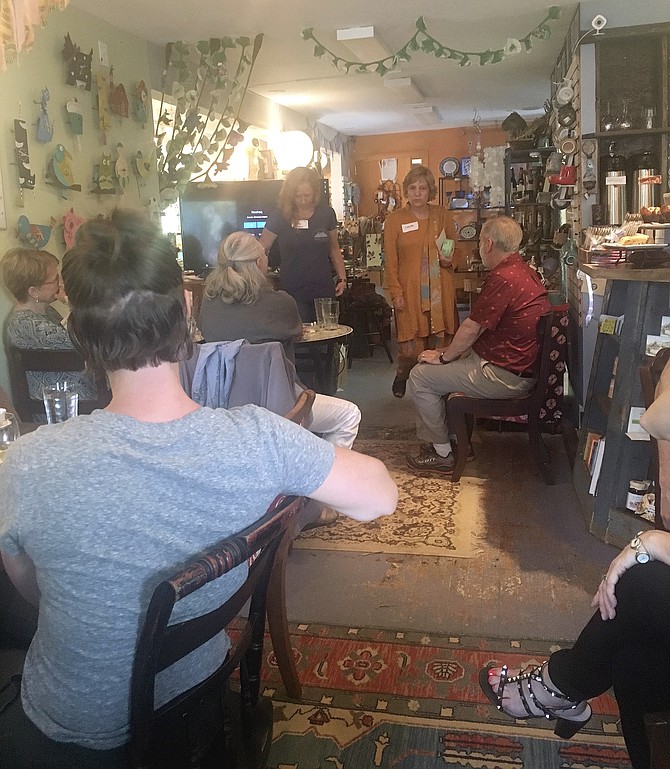 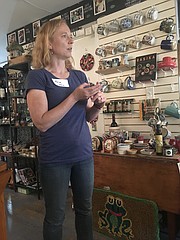 Marina LeGree speaking to the supporters of Ascend Athletics, a non-governmental organization based in Arlington which seeks to help Afghan girls overcome cultural biases against women by teaching them to climb mountains. LeGree Worked in Afghanistan, but grew disillusioned with U.S. government programs and left. The people of Afghanistan and their plight pulled her back and led her to forming this group. 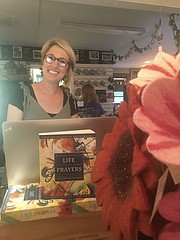 Lisa Ostroff, Trade Roots owner, offered her store’s space for the event. She does dinners once a month to help causes or increase awareness about areas of the world that need more attention.

Ascend Athletics, an Arlington-based non-profit that benefits girls in Afghanistan by teaching them how to climb mountains, was the beneficiary of Arlington generosity on June 4, which was also Eid ul-Fitr, the end of Ramadan, at a fundraising dinner at Trade Roots on Washington Boulevard.

Some people wanted to know what good it did to teach girls to climb mountains, and the girls spoke for themselves through two short films about their efforts to climb the highest mountain in Afghanistan. They gain respect, family support, and physical strength, and end up able to start businesses, support their families, and take on a role in their communities.

Volunteers for Ascend obtain the girl’s family’s support to take her for training. They interview the girls, and try to find girls who have not been to school. They invite the fathers and brothers in the family to meet the trainers and see what the girls will be doing, to show them this is “OK.” By working hand in hand with the families, word is spreading in the area. There were 52 applications and only 28 were accepted. Their first goal is “don’t get married too early” and most of the girls go onto higher education. They range in age from 15-23. One of the biggest things they learn at Ascend is the spirit of service.

One of the girls featured in the film is Hanifa. Hanifa was married at 15 to a distant cousin, then abused. Her cousin visited her and saw what was happening, and convinced her parents to let her come home. That is how she came to Ascend: she had no options. Her situation made Hanifa motivated to endure the cold and hardship of the mountains. Today, she works in Ascend’s office.

For more information about Ascend, to see the films about the girls, or to donate to the organization, see its website: www.ascendathletics.org.