Most Arlingtonians agree it is important to have more housing options available in the county. But they agree on little else.

Sunday, Jan. 8 several groups held a “Reality Check Rally” in an ongoing attempt to slow down the Missing Middle Housing Plan (MMHP) that was released by the county on April 28, 2022. Hundreds gathered at Innovation Elementary to hear experts detail the flaws with Missing Middle housing. 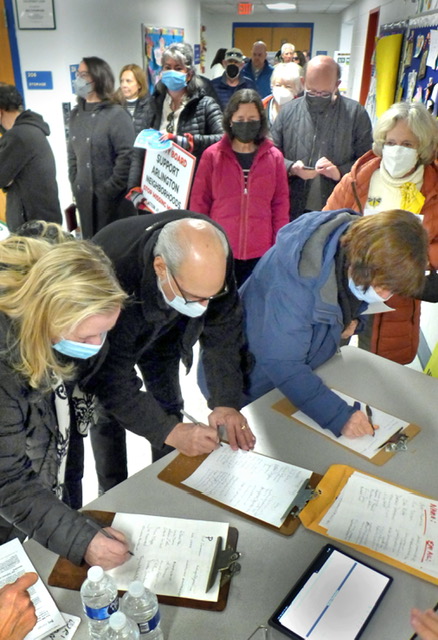 The April 2022 report stated the priority of the MMHP was to reduce housing costs, add more housing supply, and add housing choices that reflect the needs of the whole community. However, deep opposition had already surfaced by the June 18, 2022 County Board meeting. By the January 2023 rally, opponents had spent months raising issues about the potential impact of Missing Middle Housing on a dwindling tree canopy, overcrowded schools, parking problems, a stressed infrastructure and raising property values and taxes. Opponents said more research and a strategic plan are needed reflecting the impact of the housing plan on key aspects of everyday life.

Despite the appearance of opponents at County Board meetings, a number of petitions and over 100 County Board conversations, little changed in the plan as it moved through the various stages. Sunday hundreds of people gathered to hear housing experts, economists, planners, attorneys and a former Arlington County Board member.

Many argued that Missing Middle housing won’t work to provide affordable units and that there is no incentive for developers to seek out the least expensive lots and replace the single family housing with four-to-eight rental units.

One of the sticking points is whether Missing Middle Housing will be more attainable for teachers, public safety employees and service workers. The County maintained new housing types would be attainable for households of $108,000-200,000. Opponents argue in most cases new housing will be more expensive than existing housing. Average income for a law enforcement officer in Arlington is $74,000; and for a teacher is $62,000.

Despite slowing down the process by several months, the Missing Middle Housing Plan has steadily moved ahead. The County Board is expected to take its first vote on Jan. 21 to advertise zoning and General Land Use Plan amendments to enact the MMHP. The Board’s final vote to approve the Plan is expected in March.