Star Light, Star Light But No Star Tonight in Arlington 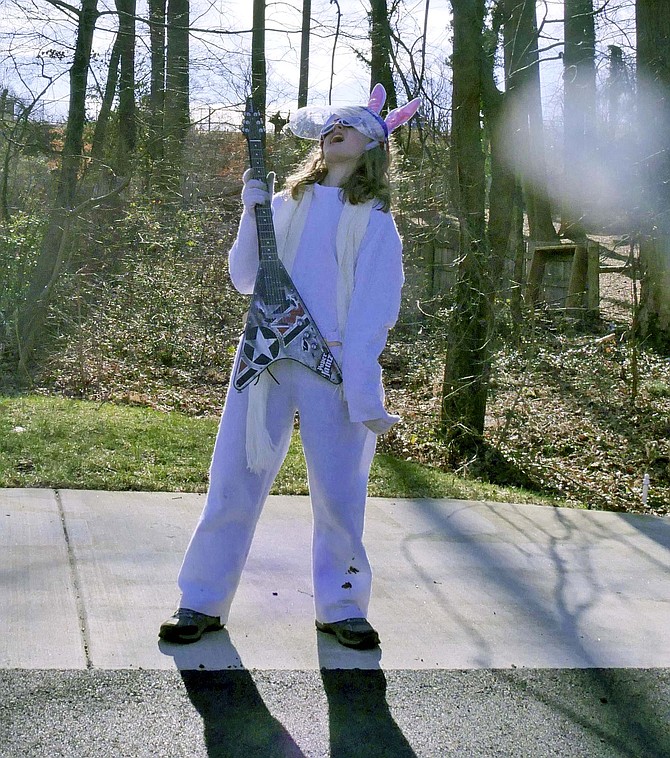 Your Sammy guide stops the car at nine stations. Winter creatures help you search for the winter star to bring back light to the world in the outdoor production of Encore Stage and Studio’s “A Night Star.” Photo by Shirley Ruhe.

Your car lines up to join the search for the winter star that used to light up the sky, “giving a glorious aura and making you feel complete. You could even see in the dark.” Then one night the night star went away and all of the other stars disappeared with it.

Encore Stage and Studio leads you on the journey, all actors and audience in masks, around the Temple Rodef Shalom parking lot on Westmoreland Street.

Each car has its own Sammy guide. You stop to inquire of each rabbit, fox or bear about the disappearance of the star. Was it a myth or reality?

Taylor, the rabbit, inquires if it is just a story but confesses, “I am really, really scared.”

The grumbly bear is more interested in watching paint dry than the mystery of the disappearing star and the creature at Station 7 says if you're looking for a super star, “I’m it. My last name is famous.”

Finally as the journey nears its end, the fox seems to be hiding something behind her back, perhaps the hot dogs she stole for lunch or perhaps—could it be the star? She disappears into the brush as Sammy the guide chases, but doesn’t catch her and bemoans the loss.

But you will find it not in places you want to go. “You may have tried and tried, but the star lies deep inside. The star is not lost. I took it the day it fell from the sky and everything you have done for nothing.”

The fox continues, “Why look away when the star is truth, wisdom, compassion, bravery. It lies deep inside.” Sammy discovers she is beginning to believe the story is true.

“We have been the star the whole time.”

Xander Tilock, the 16-year-old creator of the production, says he got this idea from a show he saw in McLean and went with his mother to propose the idea to Encore. “It wasn’t from a life experience or anything. I wanted a way to shine a ray of hope. COVID is terrible.”

He says, “COVID hit me hard. I try to do as many Encore shows as I can a year.” He says Encore is his second family. This year Encore was forced offstage and out of the theatre classrooms. He says when they asked the question of why the actors wanted to be in the show, the answer was they missed the theater.

He said, “I wanted to shine a ray of hope. The kids take on that mantra; I can feel it with all of the performers.”

Xander says they started planning in mid-October and held all rehearsals online.

There are 34 performers from age 8-16 in the total cast with 17 in the performance at one time. “This is the yellow cast. The blue cast comes on at 2.” He explains it is a long time to perform, and they learned that 2 hours is about the maximum. “Today we are beyond sold out and each performer only sits down a minute before the next car comes along.” They also have a technical coordinator who handles details like setting up the cones, traffic flow and the two cars who broke down in the line.

“I learned how to jump start a car in the middle of the show.”

The shows began Dec. 20 and ran through Dec. 30 with two hours of half hour performances in the morning and two in the afternoon. It has been cold but Wes Magnum, the volunteer at station one said they have been busy even with the cold weather. He says there hasn’t been a time when “there wasn’t one car here and one waiting.” He says the director handed out hand warmers and heat pads but the kids were too excited performing to need them.

Encore is a theatre company in Arlington “by children for children” that touches 15,000 children and adults in a normal year. The proceeds of the performances were given to Arlington Food Assistance Center and Encore’s scholarship fund.