Virginia has around 180,000 turkeys, elusive in the woods and fields. 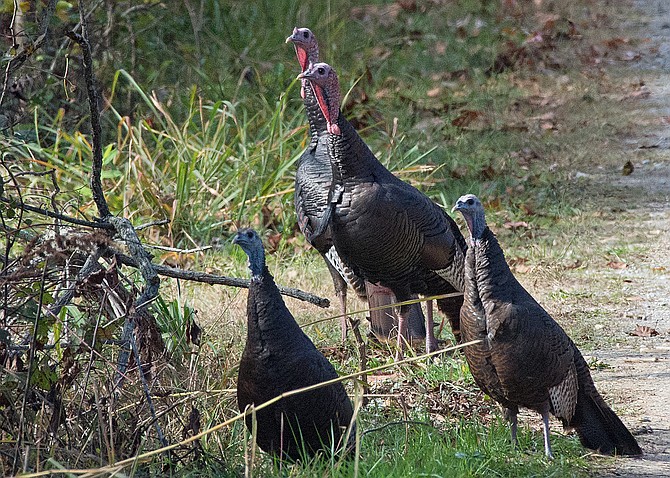 Alan Warburton did a double take when he spotted a wild turkey ambling across his Mount Vernon yard in the Tauxemont community in April. In late May, Leila Saldanha snapped photos of a turkey, Meleagris gallopavo, in Dyke Marsh. And Larry Cartwright, while surveying breeding birds nearby, reported, “A hen wild turkey strolled down the path near the Haul Road entrance. The turkey was icing on the cake.”

Wild turkeys are not those big white gobblers in children’s books or the 20-pounders destined for Thanksgiving feasts. Virginia’s wild turkeys weigh around 17-19 pounds. Males are dark brown with iridescent, bronze highlights, have an unfeathered red and blue head and neck, dangling red wattles and a hairy beard hanging from their breast. Females are smaller, darker in color, have smaller wattles and less colorful feathers and heads than males.

Where to See Turkeys

Wild turkeys may show up occasionally in parks, cemeteries and backyards, but they prefer woodlands and open clearings where they can feed on acorns, seeds, berries, grass blades and sometimes frogs and snakes. When foraging, they scratch in the leaf litter.

Larry Meade, president of the Northern Virginia Bird Club, recommends Occoquan Bay National Wildlife Refuge for turkey sightings. “I have seen them there four different times this year. They usually just cross the trail and disappear into the woods,” he said. People also report seeing them in Mason Neck State Park, Mason Neck National Wildlife Refuge and at River Farm.

Huntley Meadows Park visitors “saw plenty over the summer,” eating in the meadows or woods, reports David Lawlor, Natural Resources Manager. They are more visible – and noisy – during the spring mating season when amorous males, toms, are looking for hens. During mating season, toms puff up into feathery balls, strut around with flared, fan-shaped tails, swell up their wattles, rattle their wing feathers and gobble exuberantly, incessantly. Hens lay from four to 17 eggs.

Lawlor advises, “To see wild turkeys, be patient and spend a lot of time in woods.” Turkeys are very wary and have excellent eyesight. “Turkeys disappear rapidly for the size of the bird that they are. When they run, they can run like the wind when they put their mind to it.”

Adds Alonso Abugattas, author of the Capital Naturalist “Your best chance is right before dusk as they fly up to roost.”

Virginia has around 180,000 turkeys, reports Virginia’s Department of Wildlife Resources. In the 1920s, North American wild turkey populations hit historic lows and came close to extinction because of hunting, lumbering and forests being converted to farmlands. Wildlife managers enhanced turkey habitats and transplanted turkeys to favorable habitats to help them survive. Virginia counties with “high” populations have 0.92 turkeys per square mile of turkey habitat. Today, Fairfax County is on the low end with 0.25 turkey per square mile of turkey habitat.

Bowlers love turkeys, a term for bowling three strikes in a row. Among some people, however, the word “turkey” is a slang term meaning “jerk” or “idiot.” Merriam-Webster’s thesaurus lists as synonyms for “turkey,” words like “airhead,” “birdbrain” and “bubblehead.”

Benjamin Franklin, a turkey fan, had a different view, who, when comparing this bird to the bald eagle, saw turkeys as potential allies against the Brits: “… the Turkey is in Comparison a much more respectable Bird, and withal a true original Native of America … He is besides, though a little vain and silly, a Bird of Courage, and would not hesitate to attack a Grenadier of the British Guards who should presume to invade his Farm Yard with a red Coat on."