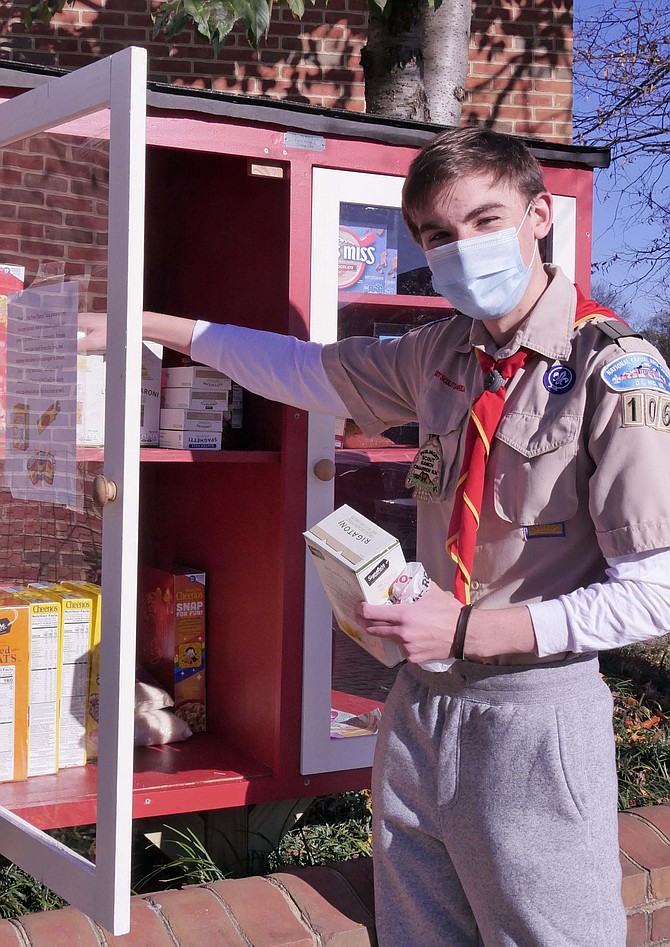 On the morning of his Eagle Scout Review Board, Charlie Gaylord inspects the food donations in the “Little Free Pantry” that he constructed for his Eagle Scout Project. Photo by Shirley Ruhe.

This year’s Eagle Scout project took a different spin with the advent of coronavirus. Charlie Gaylord has built a “Little Free Pantry” outside the Arlington Central Library to meet the increased need for supplemental grocery assistance during the pandemic.

He said the pantry is about a 4x4-foot wooden box meant to hold non-perishable items like canned goods and cereal to be donated to Arlington County Food Assistance Center (AFAC). Gaylord said AFAC comes by regularly and picks up the food.

“I’ve been back to visit several times and it seems to be doing well. But,” he continues, “unfortunately, two weeks ago the wind took the door off and I’m in the process of repairing it.”

Gaylord came up with his idea in April just as COVID was hitting. “The timing was pretty bad.” He said “COVID made the project significantly more difficult; it threw a rock into the equation.”

The idea originated a couple of years ago when Gaylord saw a similar idea at a Farmer’s Market in South Carolina. “I guess it has always been in my head. I wanted to see what would happen in Arlington.”

The construction itself took about six hours. “I had help from several other scouts.” But the entire project took about 50 hours from start to finish. The process began with the proposal packet, which has a description of the idea and the beneficiary, which in this case was AFAC, Arlington Food Assistance Center.

He had to get approval from the Library to build the Pantry on site, and it was difficult to reach them since they were struggling to get everything under control and couldn’t divert attention to his request. After approval from AFAC, the Central Library and the local and district Scout leaders, the hard work began.

He had to raise money to purchase the estimated $470 in Plexiglas, plywood, nails and screws to complete the project. “My idea was to convince other Scouts to mow lawns and give the money to me for the project. But I had to put caution in my emails during the coronavirus about knocking on doors and talking to people about mowing lawns. I guess I got 10-15 people to help out and earned $700. I gave the extra money to AFAC.

Then came the construction. He collaborated with the family carpenter, who gave advice on the best materials for the project and helped him get the best deals. About 5-6 other Scouts helped to build it.

He has known he wanted to be an Eagle Scout since he began as a Cub Scout. Now the final step in his Eagle Scout journey takes place on Monday, when Gaylord goes before the Board of Review. “This will mean so much to me, and to see how my generosity and dedication has paid off, since Cub Scouts, is a privilege.”