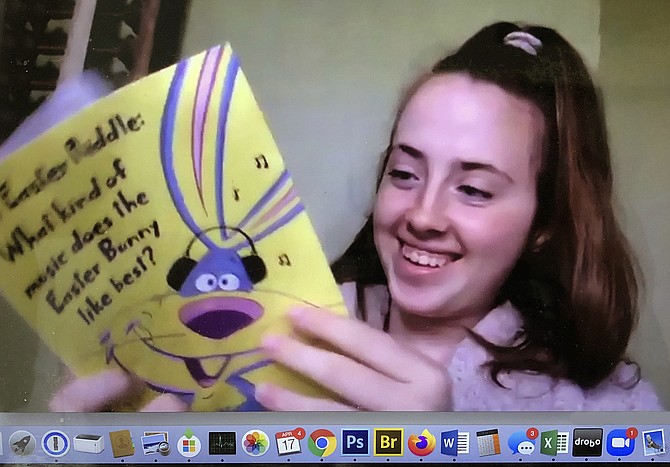 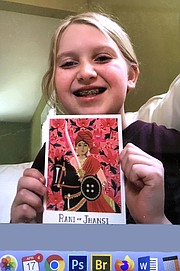 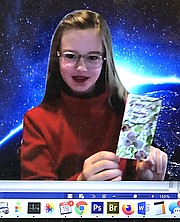 Mask made by Lillian Sun Tadlock of Vienna for postal carrier and post office worker.

The mail hits the floor with a thwack each day and startles nine-year-old Hailey Kerr, even though she knows it’s coming.

Before the virus, Hailey wasn’t home when the mail was delivered. Now she watches through her window as the masked carrier hurries from her house to the next.

Hailey is especially excited when she gets mail addressed just to her, “It’s so special to get a card in the mail. It means that someone has taken the time to write to you.”

Hailey is at an age where she does not have a phone. And now, without school and activities, her connection to friends is limited to a parent from each family being willing – and able – to loan a phone for talking or texting. So the virus and lockdown have made getting physical mail even more important to her. “Now, more than ever, it’s like a piece of gold,” Hailey told me.

Hailey, a student at Douglas MacArthur Elementary in Alexandria, is fortunate that she has a number of friends and family who send her mail throughout the year, including a young friend who is a big letter writer and card sender. And apparently, 10-year-old Eloise Frazer, also of Alexandria, has upped her game since being on lockdown.

Eloise’s recent card was newsy and topical. She thanked Hailey for cupcakes recently delivered, provided an update on the status of her cat, Bob, expressed wishes that “this,” as she referred to the virus et al, would be over soon. And she suggested they start a Zoom book club.

I mean, really, who wouldn’t be delighted to receive such a welcome break from the sameness that the virus has brought to each day.

After hearing about Eloise and her letters and cards, I had to meet her. And fortunately, she was available on short notice for a quick Zoom call.

Understated Eloise, seemed surprised to learn about the impact her thoughtful letters have on Hailey. She started writing letters and sending cards when she was just seven, after making a new friend at her mom’s college reunion. Three years later, Eloise has a pretty extensive list of friends and family to whom she writes to regularly.

She appreciates the value of written communications, “That’s how you get to know [people] better,” she says.

For 15-year-old Mia Murphy, of Arlington, receiving first class mail is also special. Mail comes mostly from grandparents, who often give her a heads up that something is on the way. Mia loves the advance notice, which gives her the opportunity to look forward to its arrival. For her, a letter or card in the mail is more personal than a text or phone call. She says that “handwritten letters are really important, they have so much value.”

Mia jokes that glitter included in the envelope from a card received years ago is still stuck between floor boards. And she laughs talking about the cursive of one grandmother that is sometimes “difficult to decipher.”

An eagerly anticipated Easter card has finally finished mail quarantine and Mia opened it on our Zoom call. In the first moments after opening, it was as though Mia had forgotten I was there, as she lost herself in her grandmother’s message, smiling at the hand-drawn cartoons and stickers. “I really get excited when I get mail. It’s a fun little pick-me-up,” Mia says.

And Mia recognizes the value of mail carriers, “They have the power to carry human connection through letters.”

That power of the United States Postal Service remains one of few areas of bipartisan consensus today, as evidenced by Pew Research’s recent government agency favorability survey, which showed that 91 percent of adult respondents have a favorable opinion of the USPS, with no differentiation in opinion between party leanings.

The USPS is the largest employer in the United States after Walmart, employing roughly 630,000 people directly and another 7.3 million in the larger mailing industry, according to U.S. Rep. Gerald E. Connolly, Chairman of the Subcommittee on Government Operations.

Postal workers are deemed essential, helping to ensure all Americans have delivery access to everything from prescriptions to essential medical equipment to those day-brightening letters and cards, always and especially during this crisis. The Postal Service is a particularly important resource for seniors and people in rural areas, who often have less access to other delivery services.

A representative from the American Postal Workers Union said the USPS is actually more prepared than most organizations for this pandemic, because they have to be prepared for emergencies like hurricanes and anthrax in order to continue and resume operations quickly in times of crisis.

Even still, people outside the postal office want to show support and it’s hard to know what to do.

Lillian Sun Tadlock, 49, of Vienna, has always had a soft spot for her letter carrier. In the summer she shares cold drinks and even popsicles. In the era of coronavirus, she made special masks for her mail carrier and the clerk at her local post office.

Unfortunately, as much as her local postal workers appreciate her kindness, the U.S Postal Service is going to need more than kindness to ensure its continued existence.

The USPS, already struggling prior to this year, are at risk to become a casualty of the virus. According to Connolly’s website, Megan Brennan, Postmaster General, informed the Congressional Subcommittee during an April 9 briefing that “The Postal Service anticipates “a $13 billion revenue loss directly to COVID-19 this fiscal year. …USPS will be unable to make payroll in October absent urgent congressional intervention, putting at risk the livelihoods of the Postal Service's 630,000 employees and the 7.3 million people who are part of the larger mailing industry.“

It’s pretty unthinkable to visualize a future without the U.S. Postal Service. When presented with the very idea, Hailey responded, “[The USPS] is important… people around the world have pen pals and need to be able to write to people they love …because letters are cool.”

If you have an opinion on the future of the U.S. Postal Service, contact your members of Congress. And share your letters with and experiences with the Connection. editors@connectionnewspapers.com