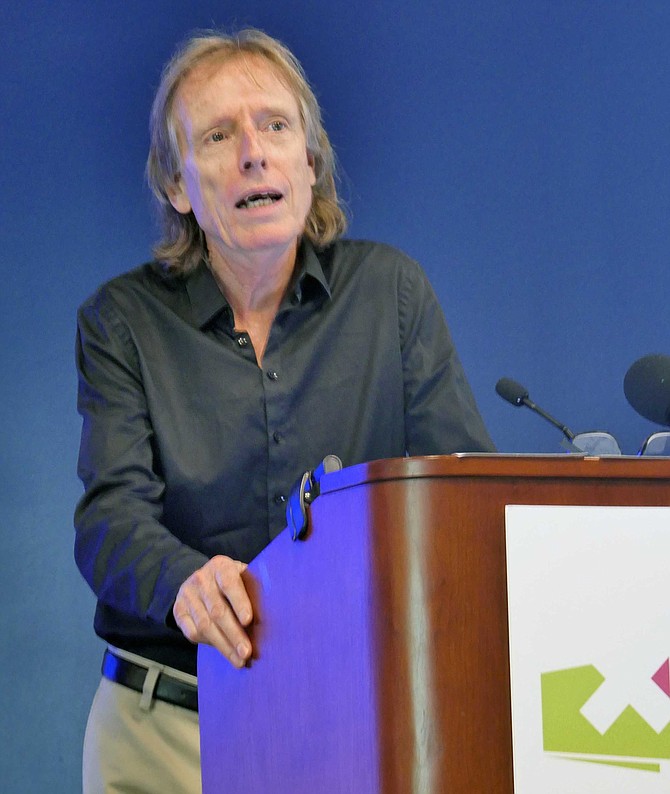 Didier Rousselet speaks at Arlington Central Library on Sept. 23 about his 600-mile walk across Great Britain. 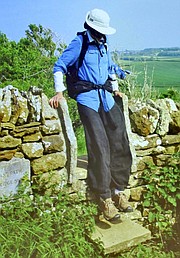 Didier Rousselet escapes an angry cow defending her calves in a meadow on his walk to discover the culture, landscape and history of Great Britain.

Didier Rousselet hunches over with a scowl on his face, imitating a cow that confronted him, gesticulating expressively like the French actor and director he is.

He explains that he was in a farm field on his 600-mile walk across Great Britain and "that cow did not look happy. I learned later I had been in a dangerous situation."

Rousselet lived in Arlington from 1992-2012, where he and his wife Monica Neagoy founded Le Leon French American theatre. They began performing in large houses in Bethesda and then moved to a tiny black box theatre on Lee Highway and eventually to the Spectrum in Rosslyn. He wrote, performed, directed and became well-known around the metropolitan area.

Later, Rousselet moved to Europe and now lives in France with periodic trips back to Arlington. He continues his interest in theatre and has performed in a number of countries.

There he envisioned his current project to experience the landscape and the culture, the similarities and the differences in countries by walking through a country.

"I walked their roads and trails among people, cars, chickens, through mud, between hedges, through flowers and watching for cows."

Rousselet has walked through Spain and through Italy and from Paris to Berlin. His most recent venture was a walk across Great Britain which he explains is three parts including Scotland, England and Wales. This fourth walk concludes the current project. Rousselet walked the 600 miles in May and June 2018 in four parts with his wife Monica accompanying him on the first and last segments.

Rousselet walked 25 kilometers a day for 50 days and produced a little book of 50 pages of 25 lines each so he explains each line for a kilometer.

Rousselet says the planning takes a lot longer than the walk. He reads for months everything he can – the history of the country, the literature. He studies the geography and he lays out the itinerary for every day. "In Great Britain, you can go from one village to another, across meadows, any private property, which is not true in Germany or Spain." There he had to walk the roads, since the trails are designed for leisure, "but not on the same side of the road." When he returns from a walk, he checks his notes and his information before writing his small books.

"The whole process takes at least a year."

Rousselet came up with the idea for his project in October 2003, when German Chancellor Gerhard Schroder had to leave the country and asked the French president to cast a proxy vote in his name. He says that after years of war between the two countries, this was a meaningful gesture. It was a special time in Europe. "Now they have been 74 years at peace. They aren't grateful enough. We should celebrate that. The solitude of my walks fits very well with the idea of peace."

Rousselet says that he first came to England when he was about 15 and learned to put catsup on everything and to drink tea. He says he has given up the catsup.

He comments that at one time England was avant-garde, while other European countries lagged behind. Now he observes, "England seems to me old-fashioned. While Spain has moved ahead to modern times, it is old merry England." He illustrates with an English "happy days" puzzle with scenes from the '50s.

His presentation was full of symbols of tattered red poppies reminiscent of the war, statues of Jean d'Arc, coffee shops and beer pubs with animal names, ceramic teapots and statues of the Queen, signs that he may encounter the faerie queene in the forest (he did not.)

But he points out there is also a melding of cultures with England and France on the same side of history in the two world wars. French street signs abound in small English towns, and on first sight some of the old village churches and architecture are indistinguishable between countries. Both France and England wanted to be a model for the world and they were in competition.

And between France and Scotland, there is a special alliance dating back to 1295, where any Scottish person in France was treated as French with the reverse true in Scotland.

What's next? Rousselet hasn't decided yet, but he knows he will continue walking, probably in Europe. Rousseler's presentation was part of a series of lectures sponsored by Encore Learning at the Central Library.