Nonprofit “dedicated to empowering people to disrupt racism wherever they find it.” 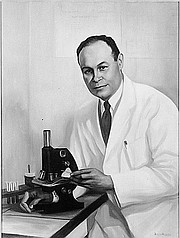 Charles Drew is one of the heroes who will be honored on Saturday, May 5, in the 5K race/walk to help fund “Challenging Racism.” He broke barriers in the early 1900s, becoming a doctor and founding the concept of a blood bank, saving thousands of lives during WWII.

Challenging Racism has been holding conversations for members of the community since 2004. The program was initially funded by Arlington County Public Schools to help close the achievement gap; it has evolved from holding one year-long workshop for parents at an Arlington school, to running several “Challenging Racism: Learning How” workshops in the same year. The Arlington-based non-profit is “dedicated to empowering people to disrupt racism wherever they find it.” It is able to help disrupt racism through a series of facilitated conversations built on facts, stories, reflection, and relationships. Coupled with learning the essential skills of listening and holding difficult conversations, more gets said, and heard, in the workshops.

The theme of the initial race is “honoring those heroes of Arlington’s history who have challenged racism and who serve as an inspiration.” The heroes are: Charles Drew, 1941: known as the father of blood banks, he was also Howard University’s head of surgery; Dorothy Hamm, 1956: she was a Black plaintiff in a NAACP desegregation suit against APS; Barbara Marx,, 1956: she was a White plaintiff in a NAACP suit against APS; Thomas R. Monroe, 1971: he was the first Black member of the Arlington Bar Association; and Evelyn Syphax, 1980: she was the first Black Arlington School Board Chair.

Challenging Racism is looking for people who want to sponsor the race or run virtually, as well as to support the race in other ways: asking a business or individual to sponsor the race, volunteering, donating directly to Challenging Racism, sharing the race on social media or talking to friends about it, sharing a flyer, forming a group to run, or standing at the finish line to cheer on runners and walkers. There is also an option to run the race “virtually” by donating but not running or walking. For more information see: www.ChallengingRacism.org/5K and to learn more about the organization itself, see www.ChallengingRacism.org.