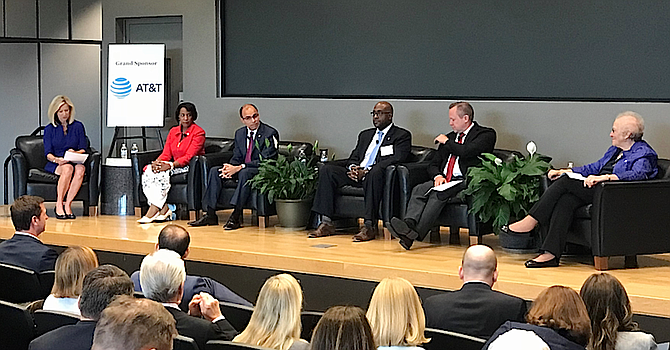 The elected leaders discussed the economic climate in the region, new and ongoing initiatives aimed at bolstering economic growth, and how each jurisdiction in Northern Virginia can work together for the betterment of the regional economy.

The panel discussion opened with specific questions about the regional impact of Amazon's new headquarters in Northern Virginia. "The region has really displayed its attractiveness to any kind of significant economic development," said Arlington County Board Chair Christian Dorsey. "The level of regional cooperation that we displayed in putting forth what we have to offer that ultimately resulted in Amazon coming to Arlington will be a model moving forward."

The conversation then moved into how colleges and universities contribute to talent and workforce development in the region. "21st Century employers are going to follow talent," said Alexandria Mayor, Justin Wilson. "Communities that invest in not only the traditional infrastructure of economic development — transit, building, and roads — but also the people infrastructure are going to be the ones that are successful."

Fairfax County Board of Supervisors Vice Chairman Penny Gross noted that economic and workforce development must be broad-based. "We need nurses, and doctors, and dry cleaners, and all the things that make our community in addition to those big jobs," said Gross. "Not all those jobs need a college degree. They may need certification and job experience."

The panel also discussed regional solutions to housing. "We have a hyper focus on talking about and meeting unmet housing need," said Loudoun County Board of Supervisors Chair Phyllis Randall. "We look at the philanthropic community, we look at the business community, it is an all-in approach right now for housing."

The elected leaders reflected on the strength of Northern Virginia's economy. "I think economic fundamentals of the region are very strong," said Prince William County At-Large Chairman Corey Stewart. "However, as we have seen in the past, this region has become so strong because of its economic diversity."

This was the fourth in a series of summits started in 2016, as a collaboration of chambers of commerce from across Northern Virginia.