A bridge park with no bridge. 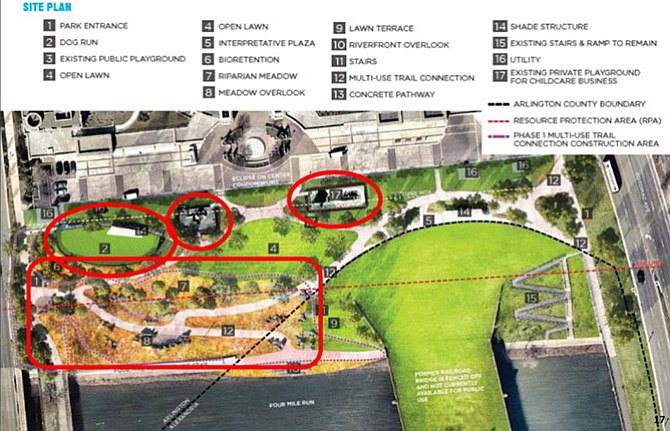 Four Mile Run trail, with a fence closing off the park.

Anyone who has travelled along Route 1 between Alexandria and Arlington, or taken the Mount Vernon Trail, has passed Short Bridge Park. As the name suggests, it's a short railroad bridge over Four Mile Run that, since the rail fell into disuse, has been overgrown with vegetation. The actual park land in Arlington is a small plateau overlooking Four Mile Run on the Arlington side. While the park is currently a neglected patch along Arlington’s southern border, new plans approved at the Jan. 27 County Board meeting will see the park revitalized over the next few years. But plans to actually fulfill the county’s dreams of a park that spans Four Mile Run are being held up by Arlington’s southern neighbor.

At the County Board meeting, the park was officially named Short Bridge Park; a tongue-in-cheek reference to Arlington’s Long Bridge Park near the 14th Bridge also undergoing a park planning process. While plans at Long Bridge Park involve an extensive community center and aquatics facility, it’s stunted cousin will see a scaled-down renewal. Currently, the only paved trail is a zig-zag jutting into the park created by Alexandria as a temporary connection to Four Mile Run. A new network of paths will cut through the site, connecting Potomac Avenue with Route 1, and connecting the street level with the trail.

The tree canopy on the site will also be expanded, with 82 new trees planted along the trails. An overlook will allow pedestrians to step off the narrow bike trail at the waterline and enjoy Four Mile Run. Staff reported that public art projects will be implemented under the bridge to try to mitigate the “scary” atmosphere that currently consists of spider-webs and gang tags.

But while plans for the border-spanning park are underway on the Arlington side, one frustration expressed at the County Board was that Alexandria has no plans to develop its side of the park. The Alexandria and Arlington border crosses Four Mile Run, includes the bridge itself, and technically cuts into the northern banks midway through where the park is currently located. Plans for the park currently include improvements on the Alexandria site on the northern side of Four Mile Run, but stop at the bridge. So at Short Bridge Park, the bridge itself will remain overgrown and inaccessible. According to Arlington staff, Alexandria’s plans for the area currently center around the AMC movie theater site to the south.

“That’s a little disappointing,” County Board member John Vihstadt said. “I am concerned we’re going to be spending significant amounts of money for improvements on the Alexandria side.”

“I was wondering if we could push a little bit,” suggested County Board member Libby Garvey. “Maybe we should talk to our colleagues about making the bridge more usable. That’s such a major connection. It’s fenced off.”

But staff noted that there were problems with building a park on the bridge that added complications to the Alexandria side. Building on a railroad bridge is a double-edged sword, because while its industrial use means the bridge is strong enough to support the load of a park, it also means the bridge has significant potential contamination. Arlington staff said Alexandria is unlikely to make an investment on the bridge until it is able to make improvements, leaving Arlington with a one-sided bridge project.

“It’s probably fair to say there are really no plans in what anybody would reasonably call the near term,” said County Board member Christian Dorsey. “In effect, if and until that happens, what we do here needs to work both as interim condition and be compatible with anything that might happen long term. We might need to look at this as the park we live with for the next 15 to 20 years. Part of why we’re calling the park what we’re calling it and why we designed it in such a way is based on anticipation for what they might be calling it later.”

Final design will be underway throughout 2018, with construction expected to begin by the end of the year. The trail connection will cost $750,000 and is 80 percent funded by a Federal Transportation Alternative Grant, with Arlington County matching for the remaining 20 percent unless staff can secure additional funds from the Virginia Department of Transportation. The park improvements are identified in the 2017-2026 CIP at a cost of $3,750,000 with final design in 2022 and construction in 2023, but hired consultants suggested the price could go as high as $5,961,000.