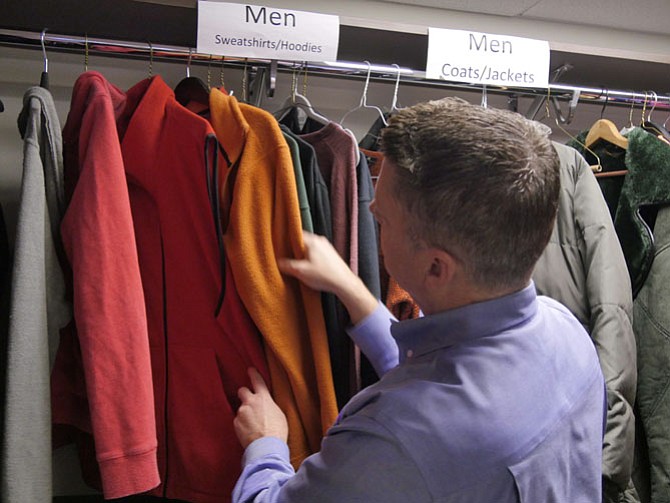 Scott Miller, senior development director for A-SPAN, sorts through the racks of sweatshirts and jackets in the clothing room at the center. He says Arlington Realtors Care (ARC) recently donated a lot of heavy jackets to the center. Photo by Shirley Ruhe.

"Of course there are some people who we can't convince to come in. Some people have mental illness and don't want to come in. They have voices talking to them. But, we know exactly where they are, and we send a team out to check on them, make sure they have blankets." — Kathleen Sibert, President and CEO, A-SPAN 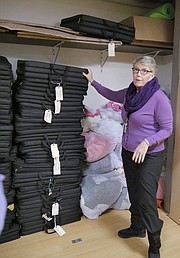 Kathy Sibert, president and CEO of A-SPAN, responsible for the Homeless Services Center, opens the hypothermia closet. It is stacked high with the mats and bags of sheets and blankets to accommodate extra homeless under the center’s hypothermia plan. 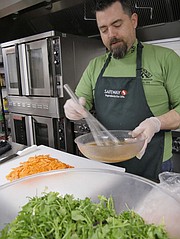 ohn Long, a resident at the center, is enrolled in the 8-week kitchen internship designed to give residents a skill when they leave the center. He says he is making an arugula salad with light balanced vinaigrette, delicious but designed to avoid any possible food allergies.

The door swings open and a burst of warm air hits the man entering the Arlington Homeless Services Center at 2020 14th Street N. It is New Year's Eve, and 79 people will be spending the night at the center that has 50 regular beds.

As he waits for the elevator, he comments that he has “been at the shelter for four months. They don't turn nobody down. If you've been in prison, they take you back. And they got me my medication and are getting an ID. Everyone on the staff here are really good people."

As a woman gets on the elevator, she comments that she “stays in the shelter almost all day because she doesn't know the area. I like the meatloaf here the best. The chef made it with sausage last time, and the lentil soup."

Kathleen Sibert, president and CEO of A-SPAN, said, "We have a hypothermia plan at the Homeless Services Center which begins on Nov. 1 and ends on March 31 each year. We can take in an additional 25 people in addition to our regular 50-bed shelter and five Medical Respite program so we can go up to 80 people a night. However, in extreme cold (below freezing) we request permission from the county to take in an additional 10 people to accommodate 90 people a night."

She says with the extreme cold temperatures they have been averaging 80 people a night. "But we never turn anyone away." Sibert says it may seem especially cold this year because this is really frigid right now, but there are always cold spells and the hypothermia plan is in effect every year.

Sibert says, to accommodate the extra people, they push back the chairs and tables in the dining room of the center and pull out the sleeping mats and bags of sheets and blankets from the nearby closet. Some of the mats are labeled with names of people from last night who are expected back again tonight.

"We put men on one side of the room and women on the other." Sibert says when they have more people, they move the women to the day room, and the men take over the dining room. She says they have more men than women because many of the women have children and they are in the domestic shelters.

"Of course there are some people who we can't convince to come in. Some people have mental illness and don't want to come in. They have voices talking to them. But," she said, "we know exactly where they are, and we send a team out to check on them, make sure they have blankets."

Even though the numbers can almost double on any one night, the center always has plenty of food "because the two chefs always make plenty. They cook enough for 150 meals a day, so sometimes there are even seconds." Today Bronx Pizza has donated pizza. John Long, a center resident, is making an arugula salad with carrots, mandarin oranges and a classic vinaigrette to accompany the pizza.

He says the homeless in the center have a lot of allergies and some don't even know they have them so "we err on the safe side." His vinaigrette includes three parts oil to one part vinegar plus a little mustard and a bit of sugar for balance. “Just like life has to have a balance.” Long is in his fifth week of a kitchen internship to equip him with a skill when he leaves the center.

Sibert says the hypothermia plan calls for two extra staff on both the 4 p.m.-midnight and the midnight-8 a.m. shifts. These staff people check homeless into the center, monitor how they are doing or handle a crisis. Sibert adds the staff also organize the showers and make sure people can do their laundry. "If they take medicine, the staff checks it into the medicine cabinet and remind them to take it."

The homeless may need clean clothes so they can go to the clothing room where there are always clean underwear and socks. Recently the Arlington Realtors Care (ARC) donated a lot of heavy coats that are lined up on a rack with shirts and jackets. "That's what makes this all work," Sibert said, "the support of the community.” A-SPAN strives to end homelessness in Arlington through housing and ongoing case management as well as shelter-supported services.