Inside the incentive network bringing new businesses to Arlington. 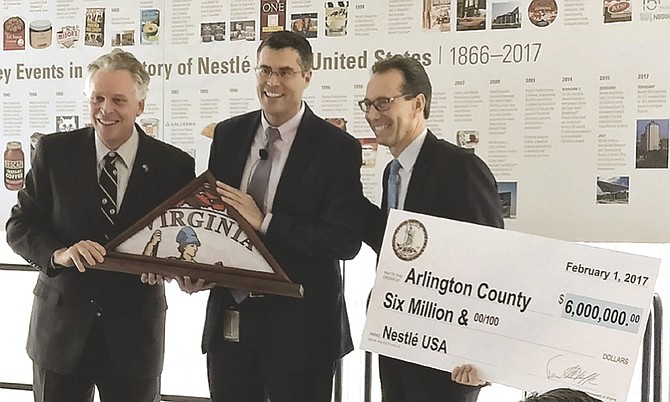 SineWave Ventures LLC will be expanding its operations in Crystal City to create 391 jobs over the next five years in Arlington. While Crystal City’s nightlife and parks likely played some part in the decision to stay, $250,000 in grant funding from Arlington County over the next five years also helped sweeten the deal. At its March 21 County Board meeting, the board voted unanimously to approve performance-based grant funding to the venture capital business at 2231 Crystal Drive.

“With respect to Arlington’s ongoing vacancy challenges, the Crystal City submarket continues to need companies and investment to diversify and rebuild its tenant base,” said Alex Iams, assistant director of Arlington Economic Development (AED) in the county staff report. “The proposed partnership with SineWave aligns with the county’s economic development strategy to attract key coworking operators, business incubators/accelerators and venture funds; SineWave adds another critical piece to the budding technology ecosystem in Crystal City … The partnership and incentives offered by Arlington and the business case for the location led to SineWave’s final decision to select office space in Arlington.”

“The idea of incentives is relatively new,” said Cara O’Donnell, public relations manager at Arlington Economic Development (AED). “It’s something we needed to look at. It’s a competitive marketplace. There’s an increasing number of markets offering incentives for markets to locate here.”

According to Christina Winn, director of AED’s Business Investment Group, there are multiple incentive programs offered in Arlington based on the type of company. Companies eligible for incentives in Arlington are divided into three categories.

The first set of incentives are for “business growth trajectory.” Winn described these programs as being aimed at start-ups, the kind that were formerly in garages, and are now in co-working spaces and incubators where they can get support services and mentors.

The next stage of incentives are for fast-growth, or “gazelle companies.” Winn said these are generally tech companies on a high growth trajectory. The Arlington County Gazelle Grant program offers between $10,000 and $150,000 to select fast-growing technology companies and tech catalyst organizations like business incubators, accelerators, and venture funds. To qualify, these companies must demonstrate 30 percent job growth over a three-year period, have a three-year commitment to occupy office space in Arlington, demonstrate capital-raising ability and show proven business and financial success.

At the top end of incentives are the corporate giants.

“There are the names we all know,” said Winn. “The Nestlés, the Corporate Executive Boards, these are generally public companies that have a long-standing and a lot of stability around them.”

“The state generally pays money up front in year one,” said Winn, “but we don’t until second or third year until performance measures have been met.”

However, Winn said the county’s match to state funding does not always have to take the form of direct cash to the company. The county can also provide tax offsets or in-kind infrastructure improvements.

“When we talk about incentives, these are not always cash incentives,” said Winn. “These could also be mentoring or free counseling, help with relocations or even just introductions. Even Nestlé needs help getting to know the marketplace.”

The county can offer multiple types of incentives. The most direct funding is through grants. The Industrial Development Authority (IDA) performance grants are for companies classified as priority economic development projects. These are companies that fill a need in Arlington County, like businesses that take up large office spaces, companies doing important research, nonprofit organizations or fast-growing tech companies. Award funds for IDA grants are determined by the project’s estimated fiscal benefit to the county. These grants are awarded starting in year two and are paid out over a customized performance period based on lease length. All incentives require the company to meet certain criteria. The company must create new jobs and pay a salary above Arlington’s average of $83,000.

Incentive programs are popular in Washington D.C. and throughout Maryland. Terry Rephann, a regional economist with the Weldon Cooper Center for Public Service at the University of Virginia, said, if properly applied, incentives can help a locality gain a short term advantage over other local jurisdictions.

“From a national perspective, it’s a zero sum game,” said Rephann. “On a locality basis, [Arlington] is competing for other firms and workers in the metro area. You’re all sort of in it together. It’s generally thought that these aren’t good ideas for localities in a metro area.”

Rephann said the state has been trying to push initiatives like GO Virginia, a program which helps regional economic diversification rather than focusing on specific cities or counties. When businesses or major government clients move from one jurisdiction to a neighboring one, Rephann said the region as a whole sees no benefit. In the long run, Rephann said incentive programs can even hurt localities.

“If one [jurisdiction starts offering incentives], it becomes a race to the bottom for the region,” said Rephann. “This is a zero sum game. Incentives like GO Virginia are trying to stop that by providing funding for joint ventures in a region.”