Breakfast After the Bell in Arlington
Votes

Breakfast After the Bell in Arlington 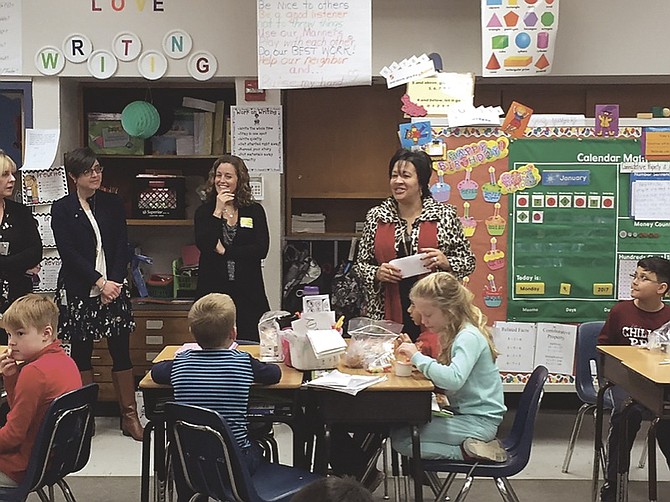 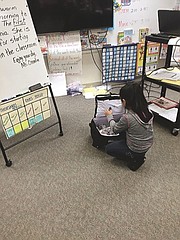 Tina Oxendine wasn’t sure about the new breakfast program. Oxendine, a third grade teacher at Oakridge Elementary, said she usually did desk work and a problem of the day at the start of each class session as students were coming in the door. Students had previously been allowed to eat breakfast in the cafeteria in the mornings, but the new policy in fall of 2016 brought the breakfast food into the classrooms to give all students a chance to eat at the start of class.

“I was worried about time constraints,” said Oxendine, “but sometimes when you let kids take over, it works just fine.”

Students eligible for free and reduced lunch receive breakfast for free while other students paid $1.60. A core function of the program is that students cannot tell which of their classmates is receiving the free and reduced meal and which students are paying.

On Jan. 9, Virginia First Lady Dorothy McAuliffe visited the school to see the program’s effect in action. McAuliffe has promoted Breakfast After the Bell models in elementary schools. In the FY2017 school year, over $1 million in state funding was committed to help schools transition to this model. For FY2018, 765 schools have applied to receive the funding and 463 have been accepted.

“We didn’t realize the positive impact that having children eating together would have,” said Lynne Wright, principal of Oakridge. “It allows everyone to come to school with a full belly. We’re flexible with [teacher and student] schedules and teachers have found that behavior has improved.”

Three hundred breakfasts are prepared every afternoon, and extended-day students at the school help deliver the meals to the classrooms.

Dana Dougherty has two students at the school and says her 5th grade student has been the one who really takes advantage of the program. Dougherty says her children eat breakfast at home, but on days where her students do physical fitness, Dougherty says she encourages them to eat if they feel hungry again.

At nine in the morning, students file into the classroom. Most head straight to their desks, but a few stop by the front and grab a breakfast from the cooler. Oxendine said she had been worried breakfast would be disruptive, but most of the students grabbing their breakfast eat in silence and read. In fact, Oxendine said she’s seen a noticeable improvement in the temperament of some students.

“This has had a huge impact on students coming to school stressed or uneasy,” said Oxendine. “Breakfast after the bell has been wonderful.”

Students polled in Oxendine’s classroom unanimously said the breakfast cereal Cinnamon Toast Crunch was their favorite, though there was a strong contingent lobbying to bring corndogs back to the menu.

“Sometimes, I wake up too late to eat breakfast at home,” said Lauren, a student in Oxendine’s class. “Breakfast is my energy source.”

Like all of the programs in Arlington schools, rising enrollment has continued to push the costs of Food and Nutrition Services in the school system up. In the 2017 school budget, the Food and Nutrition Fund cost $8.5 million, with half of its revenue coming from local and state sources and the other half in federal funding. Amy Maclosky, food service director for Arlington Public Schools, said the program did not incur any additional costs for the school system. Many of the supplies for the program, like the coolers carrying the breakfasts, were donated by Mid Atlantic Dairy. Maclosky said Oakridge is currently the only elementary school to offer breakfast in the classrooms. In the high schools a similar program, second chance breakfast, runs a kiosk that offers students breakfast after their first period class.