Another Day Directing Traffic — But in Puerto Rico
Votes

Another Day Directing Traffic — But in Puerto Rico 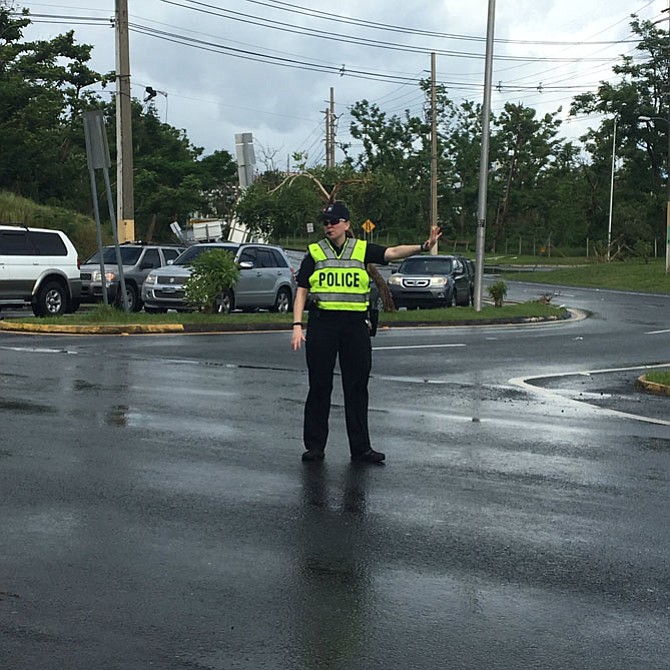 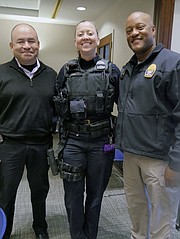 The first thing to hit them was the humidity. The first group of four Arlington County Police Department (ACPD) officers to volunteer in Puerto Rico had just landed on Nov. 10. Sarah Butzer, Second District Community Policy Team officer, said, "We left super early. We met here at 5 a.m. to make an 8 a.m. flight to Puerto Rico."

Three and a half hours later the airplane doors opened in San Juan and the humidity hit full force. "It was pretty cold here in Arlington when we left so we were pretty warmly dressed," Butzer said. The state police picked them up at the airport and the first thing she noticed "pretty immediately was the 20-foot green highway signs pushed off and down along the road and the palm trees all over on the ground."

Captain Wayne Vincent, Second District Commander going on his 22nd year, was in the second group to arrive two weeks later. He said the airport itself was empty with not more than 10 passengers at their gate. And the lack of telephone poles stood out because they were reinforced rebar concrete and to see them down was surprising.

Lt. Eliseo A. Pilco, a 20-year-veteran now with the Special Victims Criminal Unit, said he had been in the islands before and he thought it would be pretty cool to return but he noticed the differences.

The ACPD was assigned to traffic direction. Butzer said they had a vital intersection of Route 66 and Route 3. She said they only directed traffic by day because at night it was pitch black and too dangerous even with a light.

Pilco said there were no street signs. "The challenge was surreal. After days and days, you felt the impact."

Vincent said over 400 intersections were out that needed direction. U.S. law enforcement handled 50 of these intersections.

At night they decided to cook for themselves instead of eating out so they stood in line at Ralph’s, the local grocery store. "What we noticed was the long line for ice; that was the big thing. But," Butzer noticed if they got to Ralph's too late, almost all of the meat was gone and the produce bins were empty with shades down so they didn't waste electricity. If a store sign said “Abierto,” it meant the store was open so you knew they must have a generator. Only Ralph's had electricity, and all of the other stores closed at dark.

Butzer said, things were expensive — milk $6 and 18 eggs for $5. Vincent said their group decided not to eat fresh fruits and vegetables but stick to canned. Then they learned that the Puerto Ricans can't grow their own fresh produce yet so everything has to be brought in from outside.

Pilco said they worked alongside officers from New Mexico, Connecticut, a large contingent from New Jersey and locally from Prince William and Hampton. Pilco said. "You are in awe sitting there with all of these officers. And the Puerto Rican officers were amazing. They could see we were down there to help. We were there at Thanksgiving and they would drop off water and food for us while we were directing traffic when they didn't have much themselves."

Butzer said, "We ended up with more water at night than we'd had in the morning, and we drank 4-5 bottles per person per day."

Vincent said, "It was so powerful, the resilience of the officers we worked with, their challenges. They went home to no electricity; they worked 12-hour shifts with no overtime, and they got 1,000 calls daily." He said, "That's why we relieved their stress. They could concentrate on their regular duties while we took care of traffic direction. Their attitudes and the way they treated us went a long way." Butzer added, “The Puerto Rican officers are really resilient. Remember Pedro? We need more Pedros; he always had a smile on his face."

Butzer said one day some of the Puerto Rican officers took them up the mountain famous for its waterfall. They told the group to focus on the waterfall — the right half now had a trickle and the waterfall was only on the left side. "It changed the topography of the rain forest."

Pilco said the rain forest wasn't too far away from where they were. The canopy had been swept away and you could now see the ocean through the trees.

Vincent pointed out there are some good signs. Puerto Ricans told him you could slowly see green growing up where it had been all brown before. He saw a lot of good being done. Team two saw power being restored, which team one had not seen two weeks earlier.

Pilco said people would cheer on contractors. "We would stop traffic for 20 of their vehicles."

Butzer remembers a Puerto Rican police officer who started to tear up. "They're here — the calvary."

So why did the officers volunteer to spend two weeks in Puerto Rico assisting with the recovery? "I would do it again," Butzer said. "I'm able and they need help so why not?"

Pilco said, "From my perspective I went back to a place I'd served in a different capacity as a Marine. I was giving back at two different levels and contributing beyond Arlington."

Vincent was born in Trinidad. "The idea that Puerto Rico is a Caribbean island gave me a very particular satisfaction, very deep and emotional for me."

The third team of ACPD officers is now in Puerto Rico and scheduled to return Dec. 18.