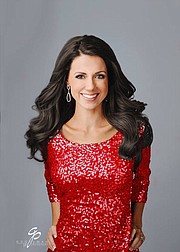 As part of The Pledge, Pickett also agreed to hold the training for all employees and their spouses to prevent child sexual abuse. The training, known as the Darkness to Light Stewards of Children Child Sexual Abuse Prevention training, was taught by Peace — a trained facilitator for the national program.

A resident of Arlington, and as a Mrs. Virginia delegate, Peace is working with the Darkness 2 Light Stewards of Children program to train all public officials, law makers, health care officials and others who are entrusted in making life-lasting decisions for children who have been sexually abused. Peace will compete for the title of Mrs. Virginia April 22-23 in Spring Hill, Va. The Mrs. America organization is the official state final to Mrs. America, a program that celebrates America’s married women and their accomplishments.

Peace is a former TV news anchor who now works as a communications director on Capitol Hill. She is an author, fitness coach, and motivational speaker for teens. She is married to a U.S. Marine, and together they have two children. Peace currently teaches on-camera classes at the Leadership Institute in her spare time and annually volunteers as a judge for the Society of Professional Journalist’s Mark of Excellence Awards.