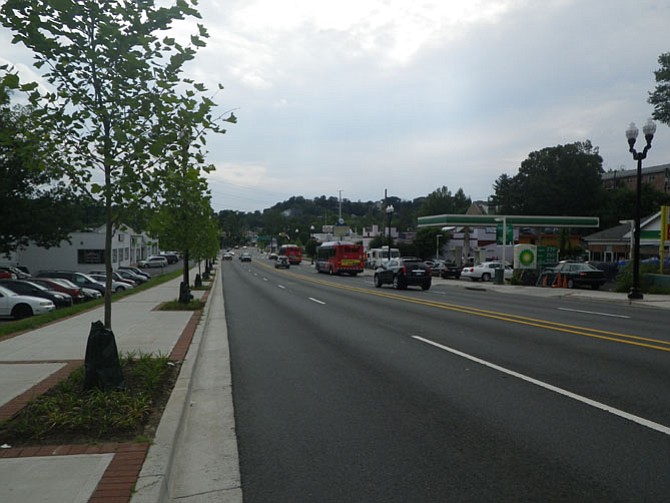 If you live near a road where there’s no sidewalk on either side of the street, or the sidewalk is incomplete, your street might be be receiving a makeover courtesy of Arlington County. The new Neighborhood Complete Streets Program, approved by the County Board at its Jan. 28 meeting, could have a radical impact on the lives of some Arlingtonians.

The new projects are prioritized based on points “earned” from problems facing the street, like speeding issues, frequent crashes, inadequate street lighting, and lacking in sidewalks. Additional points come from the location of the street, with priority given to those near a metro station, school, bus stop, or along a bicycle route.

Once the streets in need are determined, the program will assess potential solutions and funding related issues, then presenting its proposal to the County Board.

But ideal as the new program sounds at first, it had its share of detractors at the County Board meeting. Many neighborhood representatives expressed misgivings at a part of the program which allowed the program to get around the existing County process which requires the approval of neighborhood organizations. Local citizens were worried that the new program would give the county a way to circumvent the wishes of the neighborhood.

“These things are perfect in the abstract, but the details matter,” said Vinh Nguyen, a resident of Ashen Heights. “The sidewalk project I participated in failed, it wasn’t approved by [the local residents] for very specific reasons … I’m bringing this up because that’s a sign that the program works.”

In particular, part of the program that concerned citizens was a section that seemed to deliberately prohibit neighbors from planning projects and voting on them. The program said that there would be no resident voting or petitions on projects, and that all feedback would have to go through the staff.

When the decision went to the County Board, there was unanimous agreement that the process needed to be made more open to the public.

“We’ve heard a lot of concern about this being a way for failed projects to reappear,” said County Board Member Katie Cristol. “My concern is that this would represent a failure of the democratic process and a let down of what I hope this program guide might offer.”

Board Member Christian Dorsey proposed the first of several amendments, which prohibited any project that was not approved by the neighborhood conservation process or was removed from that process from being considered in the Complete Streets program for four years after the withdrawal.

“These are friendly amendments?” County Board Chair Libby Garvey asked, prompting groans from Fisette and Vihstadt.

“Well, let’s see how friendly they are,” Vihstadt answered.

But the amendment, it turned out, was more of a clerical adjustment. The vague promises to listen to the public remain, and the County Board unanimously approved Arlington’s Neighborhood Complete Streets Program.