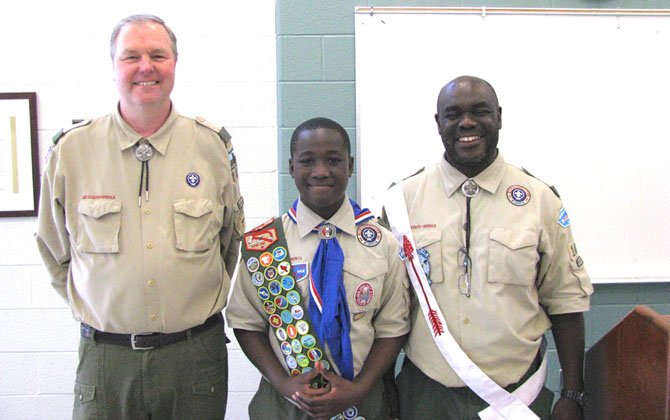 Centreville-based Boy Scout Chiti Tembo was honored at Sully Government Center on Sunday, May 4, for achieving the rank of Eagle Scout, with Boy Scout Troop 146.

Chiti, 13, has been a Scout since 2006, when he joined Cub Scout Pack 43 at St. Veronica Church in Chantilly as a Tiger Cub Scout. 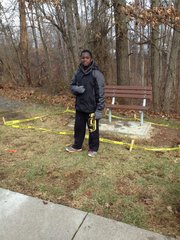 Inspired by older Troop members who made an impact on their neighborhoods with their projects, Chiti decided to install two benches in concrete slabs in his Cabells Mill Community, to allow walkers, runners, adults and children to rest, relax and enjoy the neighborhood. He also installed a wire gate fence on a community access road to prevent unauthorized vehicle access and accidents. Chiti was assisted by more than 50 Scouts, community residents, friends and family.

Chiti was one of the last two Scouts to achieve Eagle Rank with Troop 146. Troop 146 has now become Troop 17, meeting at Firestation 17 (near the IHOP in Centreville).

Chiti has earned 54 Merit Badges and he serves actively among the Brotherhood of the Order of the Arrow, Sully Chapter. He is also a black-belt in Tae-Kwon-Do, a PADI-certified scuba diver, and plays basketball and soccer with CYA.

Chiti is on the 8th grade Honor Roll at Rocky Run Middle School and he has been accepted at several high schools on the east coast for fall entry.