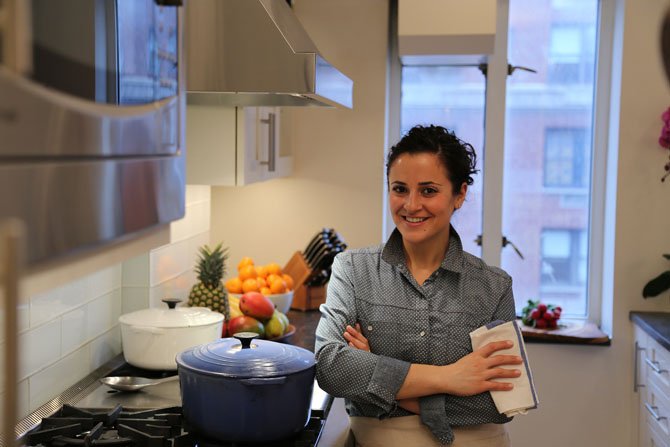 When Dara Yaffe Lyubinsky was growing up in Potomac she always enjoyed cooking, whether it was with her family and friends, or for her synagogue. Today, she’s passionate about cooking fresh, seasonal meals.

Lyubinsky, like many chefs and culinary enthusiasts, is looking forward to strolling through farmers markets and creating fanciful spring dishes with the season’s freshest bounty, especially as she prepares to return to D.C. from New York. However, she and other chefs are making the most of the available spring produce even if warm weather seems a like a distant dream.

“Since it’s still so chilly outside, and the forecast is still calling for snow, we’re incorporating some of spring’s newest produce into some heartier, cold weather dishes,” said Lyubinsky, a professional personal chef and the owner of Tastes Like More Personal Chef Service (www.tasteslikemoreDC.com), a boutique culinary service. She’s also a graduate of the Institute of Culinary Education and the University of Maryland, as well as a 2001 graduate of Thomas S. Wootton High School in Rockville.

“…We’ve been slowly dipping our toes into lighter fare influenced by the beautiful produce that is slowly becoming available as spring tries to fight its way through this seemingly everlasting winter.”

One meal that melds comforts of winter with the freshness of spring is vegetable risotto. She combines green, spring vegetables with cool, creamy aioli, which she flavors with ramps to combine the best flavors of both seasons.

Although Lyubinsky often cooks for athletes, media personalities, and financiers, her favorite people to cook for are families who simply want to eat more wholesome, carefully-curated, good-for-them food at home.

“We’ve been slowly dipping our toes into lighter fare influenced by the beautiful produce that is slowly becoming available as spring tries to fight its way through this seemingly everlasting winter,” said Lyubinsky. 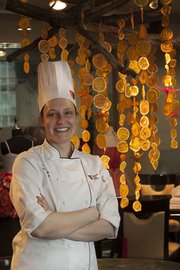 Photo courtesy of The Art Institute of Washington

Kristen Robinson of The International Culinary School at The Art Institute of Washington enjoys combining the bold flavors of fennel and grapefruit to create spring salads.

COMBINING THE BOLDLY DIFFERENT tastes of fennel and citrus is also a favorite of Arlington, Va., based chef and instructor Kristen Robinson of The International Culinary School at The Art Institute of Washington.

“Fennel: I like to shave [it] thin and prepare a salad of shaved fennel and grapefruit over arugula dressed with lemon juice and olive oil,” she said. “I love to fry artichokes and serve [them] with a mint pesto and currants and pine nuts, or braise the artichokes with saffron and dried cherries.”

Robinson uses fava beans and peas in spring salads, but she also finds heartier uses for them: “I also like to purée them and use them as a substitute for potatoes and add herbs like parsley or chives.” She recommends serving her fava and pea purée with chicken or fish.

In spring, asparagus can often be found roasting in Robinson’s kitchen. “I like to roast it in the oven and eat it with ricotta cheese with lemon zest and black pepper,” she said. “Sometimes I add a poached egg and call it breakfast.”

Nancy Pollard of La Cuisine in Old Town Alexandria, Va., said, “One of the first things I do with spring produce is make some … risotto. In the next week or so, we’ll start seeing more asparagus at farmers markets. I love doing risotto with whatever I can find at the farmers market like asparagus, peas or ramps,” she said. “It is great served with grilled fish or grilled meat.”