EN Bistro and Sushi Opens in the Village
Votes

EN Bistro and Sushi Opens in the Village 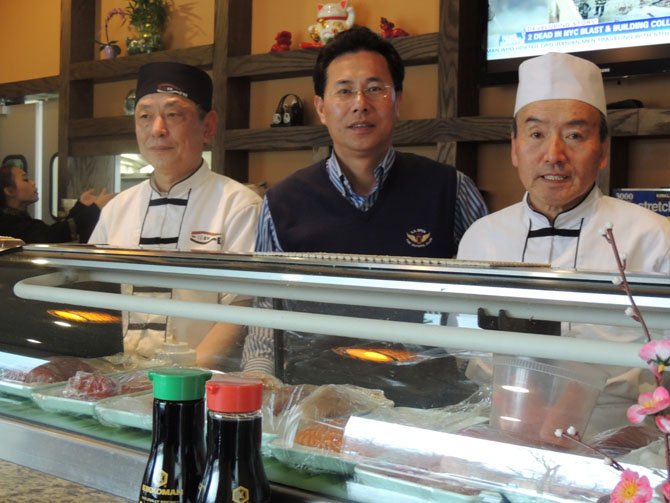 The word EN in Japanese means destiny — and it seems the fate of EN Bistro and Sushi is to bring the freshest of sushi, sashimi, Japanese, Chinese and Thai food to Potomac residents. With the freshness and quality of his sushi and menu items, well-known Montgomery County sushi chef and restaurateur Billy Ye is already making his mark on the Potomac restaurant scene.Located just behind the Verizon store in the

Potomac Village Shopping Center (near Tally Ho and next to Big Wheel Bikes), the space has been built out into a Japanese bistro, complete with a kimono, once owned by a famous Japanese movie actor. The kimono was sent to Ye by his mother many years ago — and he has been waiting to find the just right spot for hanging it. Ye has other Asian restaurants in Montgomery County, including Momo Taro Sushi (now closed) and Sushi EN in Rockville and the EN Asian Bistro in Germantown. However, in addition to overseeing his restaurants, his specialty is catering — providing fresh, delicious sushi to other venues, such as Congressional Country Club, Bethesda Country Club, the ATT National Golf Tournament, the Marriott, the

Hyatt and more. Ye is well-known throughout the county for the sushi and sashimi platters he delivers for parties and galas. “I usually provide 1000 – 2000 pieces,” said Ye. “The most we ever did was 18,000 pieces for the Gaylord Hotel.” He has also catered many Democratic and Republican Governor parties, bar mitzvahs, weddings and scores of local parties.Ye, who is Chinese, learned his skill of making sushi in Tokyo. After he immigrated to the U.S., he worked at sushi restaurants and then went out on his own. Now he trains sushi chefs in the art of making sushi. “My secret is to use the freshest fish that I can buy. I also use premium Japanese sushi rice.”“I originally thought of opening the restaurant in Potomac to be closer to the sites I cater,” said Ye. “However, the restaurant has taken off and we are attracting crowds from all around the area who know me. We are doing really well. We also feature take-out and free delivery and that too is very busy.”Ye’s wife Lily, who during the week is the cafeteria manager at Travilah Elementary, and his daughter help in the restaurant on the weekends. He also has a number of experienced sushi chefs including Chef Liu and Chef Honma. In addition to sushi and sashimi, the chefs prepare Chinese, Thai and other Japanese dishes daily. Some of the menu items include teriyaki chicken, beef, salmon and shrimp tempura as well as noodle dishes from all three countries. The restaurant also features a variety of vegetarian items as well as lunch and dinner specials. “Since I am Chinese, I know what good Chinese food tastes like. Ours is authentic and excellent,” said Ye.EN Bistro and Sushi, 9945 Falls Road, Potomac is open 7 days a week from 11 a.m. – 10 p.m. For more information, call 301-983-8600 or go to www.enbistro.com.