Power of a Stream in Arlington
Votes

Power of a Stream in Arlington 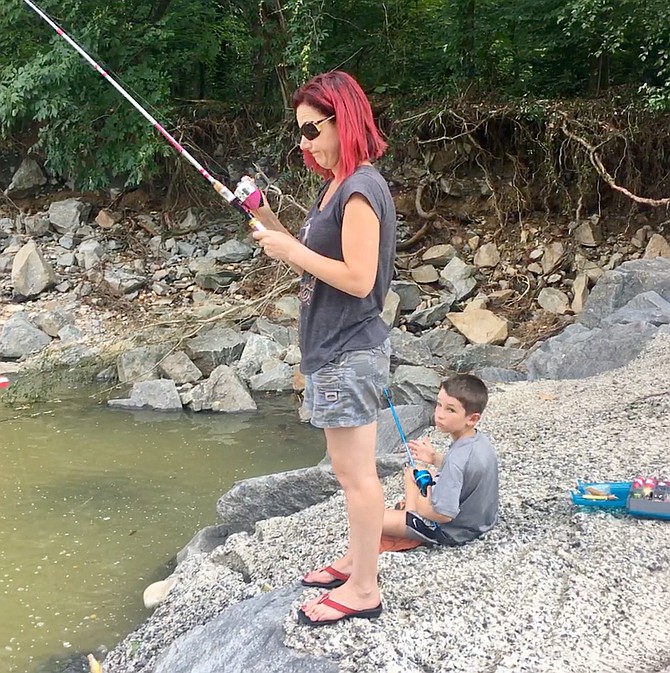 Lucas Yarushuk fishes with his mother on Four Mile Run. He used hot dogs as bait and said he had already caught a nice-sized eel and a fairly large fish. His mother said she would use the eel for Unani sushi. Photo by Eden Brown. 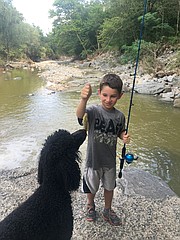 Lucas Yarushuk,8, shows the small “sunny” he caught to a very nosy dog named “Juno,” who wasn’t sure which was more interesting: the hot dog bait or the fish dangling from the pole. 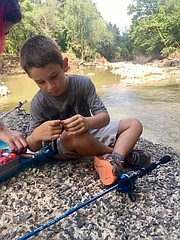 Lucas Yarushuk baits the hook with hot dog. His mother said he can spend hours fishing. She has encountered quite a few people his age who have never seen a boy fishing, and wanted to know how “you get that pole?” She gave them turns fishing and they all declared fishing “really cool.” 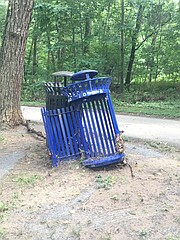 Two trash cans were disturbed by water that went more than 20 feet up the bank.

Lucas Yarushuk had “gone fishin’.” It was the day after the big storm in Arlington on Monday, July 8, and the stream was showing the signs of the storm’s ravages. Banks were a few feet further back, tree roots exposed, large pieces of metal were bent and twisted along the banks, water had reached 20 feet up the bank, pushing trash cans apart. The stream itself was muddy and turbulent, but calm enough to sit and fish.

“Usually you can see a really big snapping turtle in this spot,” said Lucas’ mother. “And we’ve seen a lot of snakes, too,” said Lucas. They fish regularly, because she feels it is important for youngsters to put away the books and iPads for the summer and do what little boys like Lucas used to do in her native country, Albania: go fishing. Sitting there, watching the animals around him, hearing the rushing water, Lucas was learning a lot about the other kind of power a stream has.