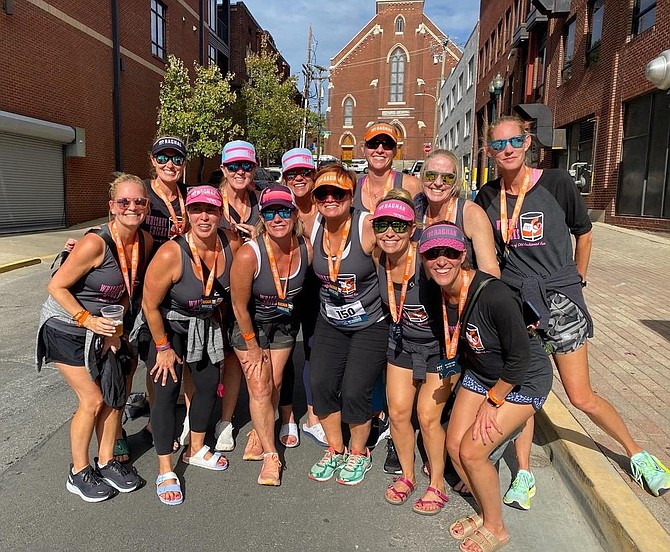 A group of local moms, deemed the ”Whiskey Chicks,” headed for the airport for Lexington, Kentucky to run the historic Bourbon Trail on the first weekend in October. Susan Michaels, captain of the team said, “Some of our group had never run a race before but a number of us are long-time runners and a couple of us had done this run before and we had some real bourbon fans.”

There were 386 teams competing.

The group consisted of 10 Arlingtonians who were joined by two other team members from Birmingham. Alabama and Denver, Colorado. Michaels said they signed up in January and have spent the months since then organizing all of the details. “I was in charge of the logistics for hotels and travel.” She says it took a lot of organizing to figure out the schedules with some stay-at-home moms and others working different schedules. “And,” she says “it took a lot of support from our husbands to get the kids to all of their activities while we were gone.”

The race took place on Sept. 30 and Oct. 1 in Lexington, Kentucky and the surrounding area. Karen Garesche, a race participant, says the team finished in 34 hours, 12 minutes and 49 seconds. The Ragnar Relay Bourbon Chase is a 200-ish mile street race composed of 12 runners who run three legs of different mileage.

Michaels, who ran the lap that was 21 miles over three legs, says she was runner number six in the first van. She said the race started at the Jim Beam Distillery and most of the relay exchanges were at local distilleries along the way. But she said they saved the bourbon until later.

“We brought it home for our husbands and many of us are big bourbon fans.”

“After my leg we stopped to eat and catch a few hours of sleep in the van before turning it over to runners 7-12 in van 2; then we started over again.” Michaels says they ate a lot of bagels and sandwiches to get enough energy to keep going but nothing too heavy to upset the stomach.”

The weather was perfect without the hurricane rains happening in Virginia. “We ran on streets, everything from four-lane roads to sidewalks through neighborhoods to two-lane country roads. We had to wear a lot of gear through nights so people could see us. It was a pretty big deal with 386 teams competing.”

Garesche explains, “It takes a lot of coordination between 12 individuals including travel and lodging accommodations, team logo, shirts and magnets (to tag other team vans) and race preparation such as runner line up, food and drinks to last over the entirety of the race.” Leslie Humes designed the logo that went on the hats and the T-shirts. “It is an old fashioned drink made out of bourbon.”

Garesche says, “Most of the team were bourbon enthusiasts and jumped at the chance to pair two passions together. But mostly the team enjoyed a weekend away to bond with friends while challenging themselves and exploring new places.”