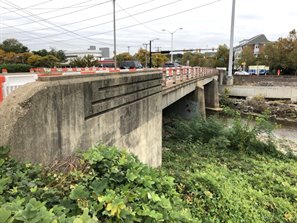 Because of continued degradation of the bridge beams, engineers will close the West Glebe Road Bridge to all motor vehicle traffic beginning on Monday, May 9, 2022, for construction of a planned replacement superstructure, road deck and beams. Two motor vehicle lanes on the renovated bridge are expected to reopen in early 2023 along with one of two widened sidewalks.

The current structure connecting Arlington and Alexandria over Four Mile Run was built in 1956. Elements have experienced noted deterioration in recent years.

In 2018, a 5-ton weight restriction was placed on all user vehicles. In March 2022, all southbound traffic was detoured away from the bridge amid signs of continued structural beam degradation.

Allowing continued motor vehicle traffic with the additional stress of construction has now been ruled out. Pedestrians and bicyclists will be able to use the bridge through June, after which they will be directed to a temporary crossing, independent of the superstructure, to be built along the bridge, expected to open in July.

The bridge’s original piers are stable and will be used to support the new superstructure, reducing project costs, construction time, and impact on the watershed.

The project is set for completion by summer 2023.

Arlington County and the City of Alexandria continue to coordinate closely on the bridge replacement project. Crews will mobilize for the job later this month