Couple plays pickleball around the world, and in Northern Virginia Senior Olympics. 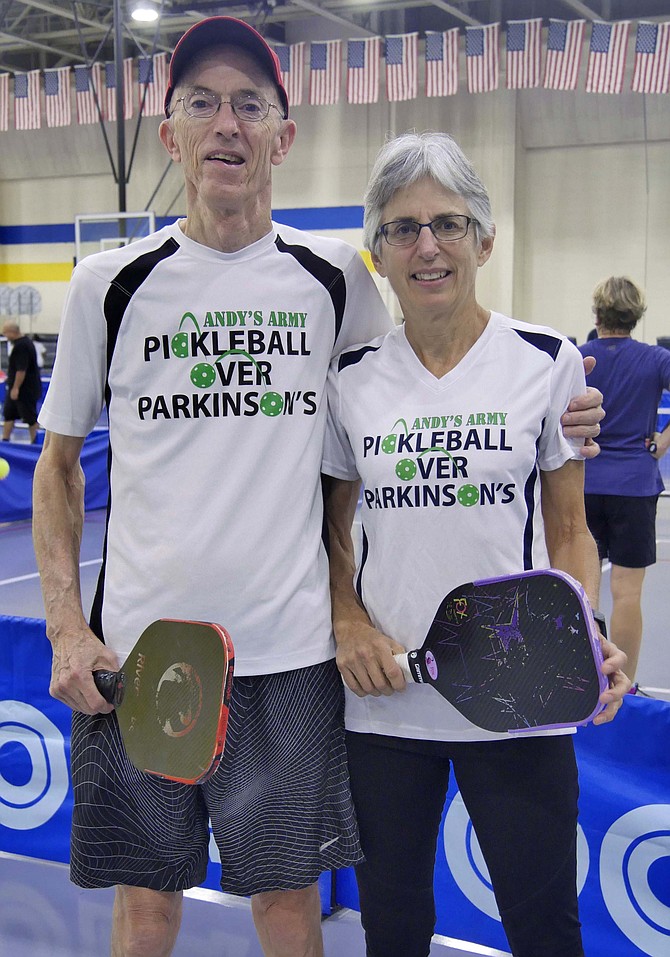 Andrew Leighton and his wife, Helen White, pickleball partners, are sporting their “Pickleball Over Parkinson’s” T-shirts. Photo by Shirley Ruhe.

Andrew Leighton and his wife, Helen White, are headed to the pickleball court at Thomas Jefferson Community Center at 7:30 a.m. Friday sporting their "Andy's Army" T-shirts. Leighton explains "Andy's Army" is a support group that follows his pickleball matches online. Northern Virginia Senior Olympics (NVSO) begins Sept. 14, and Leighton is signed up for pickleball men's doubles while White sits out this year's NVSO due to knee surgery. But they are still practicing four-to-five times a week.

Leighton says, "It's odd with Parkinson's. It's the exact opposite of pickleball." He says, "With Parkinson's they want you to slow down, step slowly. But with pickleball, you need to be faster, have a quicker reaction time, get into position early." Leighton adds, "These things don't really go together."

But Leighton says, "I found out that playing pickleball quiets my symptoms a bit, especially my tremor." And he adds there is some evidence that playing pickleball slows down the progression of the disease. "There has been a lot of research but of course I don't know. I have nothing to compare it with. But one thing I know for sure is that I'm not bothered as much by the disease when I'm playing."

He says people always ask him if he wins. "The thing you want to do is play your best. Some you win, and some you lose." Leighton and his wife play as many as 10 national tournaments a year. They were in Boston for the regionals about a month ago. "I played one of the best games I've ever played in my life but lost." He and his wife were playing the gold medal team and lost 11-9, 11-9, a close match.

Leighton likes pickleball because it is very social. "You are really close to your opponent. It's like you're playing a giant game of ping pong where you combine power and speed with reaction time." There is a lot of net and, "I laugh. Everyone laughs."

He says you make a lot of friends and play with a lot of different partners. "Sometimes your partner one year is your opponent the next year." Also he says the drop-in nature of pickleball contributes to the game since you can stop by and play for two minutes or two hours and always find a partner.

Leighton says he and his wife sit down at the beginning of the year with a calendar and decide which tournaments to enter, combining it with touring where they want to go. He says there is a pickleball website that lists international and national websites and pairs you up with someone of your own skill level. For instance his partner in Boston was from California and had a house at Cape Cod.

Leighton attributes his pickleball success to his years of playing tennis. He says, "Believe me, I didn't think I couldn't do this. "I have a skill because I can find space on the court. I hit a lot of shots that a lot of other players frankly don't hit." 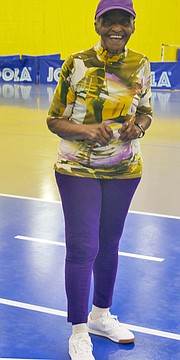 Alease Brooks takes a break from running laps round the track at Thomas Jefferson Community Center in preparation for the Northern Virginia Senior Olympics where she will compete in running events, throwing sports as well as pickleball. Brooks has been chosen to carry the Olympic Torch at the opening ceremony for NVSO on Saturday, Sept. 14. Brooks is 86, (almost 87) and will be competing for the 16th year. She is sporting a purple and gold outfit, one of the many colorful outfits that her kids provide for her competition and ”my grandchildren don’t miss. They cheer me on.”