From Homeless to New A-SPAN Home 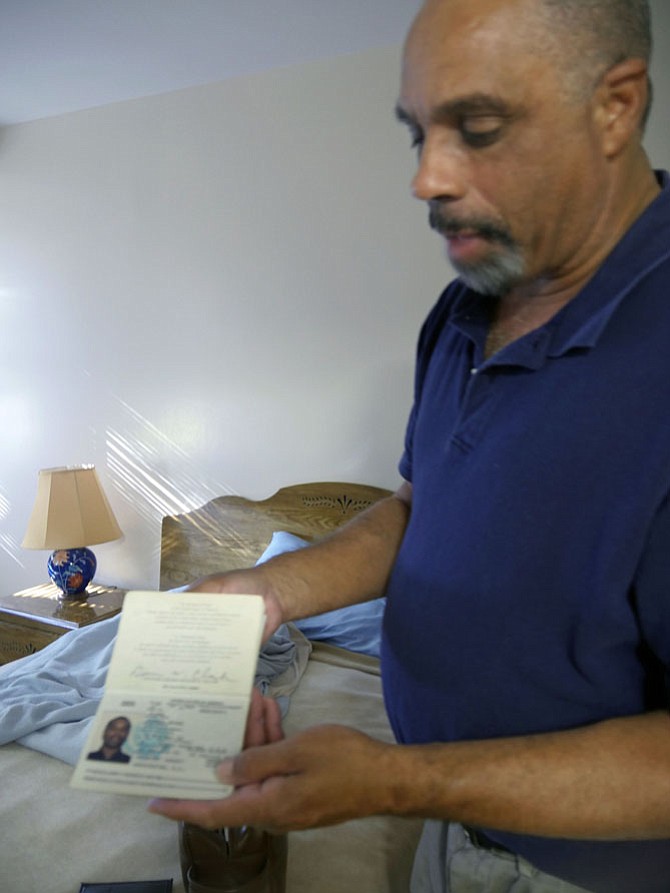 Dennis Clark pulls out an outdated passport from 1993-95 when his wife was a diplomat in Venezuela. He says, "I went a long way from being the husband of a diplomat to living on the streets on Columbia Pike. And now I have my own home." Photo by Shirley Ruhe.

Walk through the front door of Dennis Clark's new apartment on N. Thomas Street. You will hear the story of how Clark went from Army E-4 specialist and leader of men to sleeping on a bus shelter bench on Columbia Pike. "It was a trickle," he said. "It didn't all happen at once."

Clark was a non-commissioned officer working at Ft. Eustis where he was training in transportation to remove cargo from large ships. It was 1975-78 just in the post-Vietnam era. "I prayed every day in high school I wouldn't end up in the war."

After he left the Army he worked for five years as a civilian police officer for the Department of Defense. "I started missing the military. I was 29 and in pretty good shape." But somewhere in there he got married and his wife didn't want a military life. "She worked for the government, too. She started as a GS-2; I don't even know if they have them anymore." He says he taught her what he knew but gradually she zipped right by him and ended up as a GS-12. "She did well."

Clark pulls out an old passport. "My wife became a diplomat in Argentina. I went a long way from being the husband of a diplomat to living on the streets." Clark says they separated in 1998 and got divorced four years later. I met a woman here. I guess I fell in love and we lived together for 12 years. "He says she woke up on Valentine's Day — it was a Saturday — and said, 'get out.' That's when things fell apart."

He said he did a lot of couch surfing with friends and occasionally he slept in his cab. “I stayed in cheap motels. In the end things got really bad, and I had trouble renewing my license." And then with Uber taking a lot of the taxi business he couldn't make enough money driving a cab to even pay for cheap motels.

Then one morning a couple of hours before sunrise, "I love this part of the story," he was sitting in a McDonalds drinking a cup of coffee. "I had spent the night sleeping at a bus shelter on Walter Reed. Ben, a local guy, and I started talking and we got along really well." Clark said, "Ben (I don't know his last name) taught me the ropes. He took me to SEEC where I could sit and drink coffee until 11 a.m. and then to S. Nelson to wash my clothes. I went to the Emergency Winter Shelter when it got cold in November and stayed for 2.5-3 months. Then I lived with a friend for a year."

This year he moved to the new Homeless Services Center in April. He said, "It is real nice. Some people say it is like living in a hotel, but it's not home. I told my friend Ben that I'm going to stick it out this time and not return to couch surfing."

Then he applied for housing with A-SPAN and the last week in August he received his one-bedroom apartment. His case manager says that he got housing quickly, partly because he didn't have any barriers like a criminal record or addiction that can slow down the process. Clark shows off the kitchen with all new cabinets and refrigerator. He opens the door to the freezing compartment to reveal lasagna, butterflied shrimp and spaghetti — "man's food; I don't cook much." He says the furniture has been donated by "my bourgeoisie sister from her big fancy house in Maryland. We joke about it," he said.

Clark says having his own home "helps me feel comfortable every day. I watch sci-fi. I don't worry except when business gets slow." Forty percent of his income goes to his landlord to pay the rent. Clark says his 28-year-old son and wife and three grandchildren offered to come and visit on a recent weekend. "I jumped at that. It can get a little lonely." He says he had sleeping bags all over.

The one constant for Clark has been his cab. "I've been driving a cab all but 4-5 years out of the last 28 years. I just like the freedom." He used to get up to start work at 4:45 a.m., prime time for people going to the airport. But the business is not there anymore so he starts closer to 6 a.m. Clark says now that he is in his new home, "I’m 60, and I count my blessings every day."